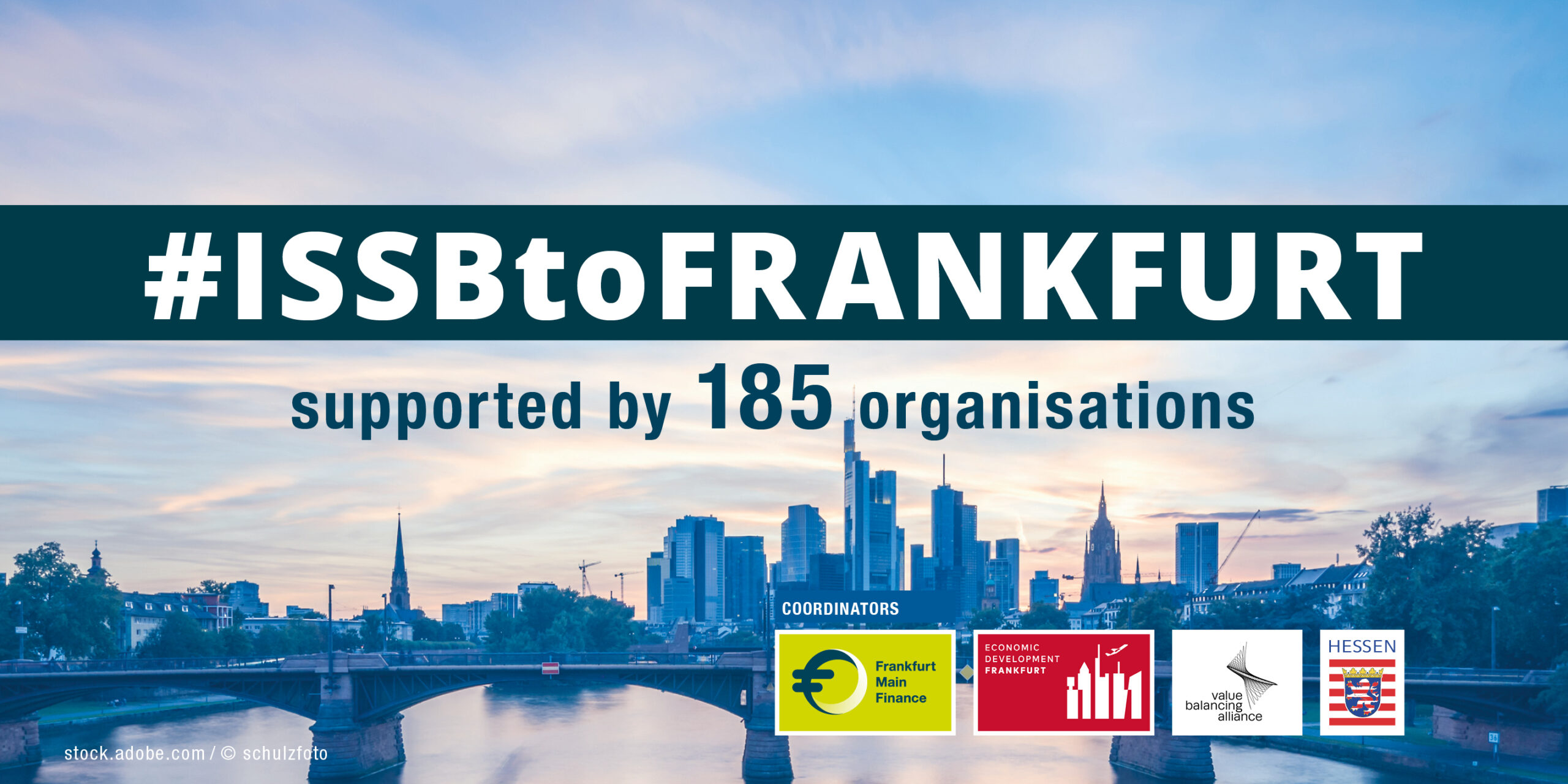 Frankfurt am Main 2 September 2021 – The financial centre Frankfurt is applying for the seat of the International Sustainability Standards Board (ISSB). The ISSB is to be created under the umbrella of the International Financial Reporting Standards Foundation (IFRS Foundation) and develop international standards for sustainability reporting by companies. The official application was submitted jointly by the Financial Centre Initiative Frankfurt Main Finance, the Value Balance Alliance and the Frankfurt Economic Development Agency to the IFRS Foundation based in London on Tuesday. The application received approval from more than 180 renowned supporters.

The Frankfurt financial centre was able to win numerous supporters from politics, the financial sector, industry, civil society and science for the application for the location. A total of 185 companies and organisations have lobbied for the ISSB to be based in Frankfurt, including major associations such as the BdB (Federal Association of German Banks), the BDI (Federation of German Industries), the BDA (Confederation of German Employers‘ Associations), the Deutsches Aktieninstitut (German Equities Institute), the BVI (Federal Association of Investment and Asset Management), the GDV (German Insurance Association) and numerous others. Together, these associations represent about one million member companies in a wide range of sectors with a total of more than 20 million employees.

At the federal level, the Federal Ministry of Finance and the Federal Ministry of Justice and Consumer Protection have lobbied for the ISSB to be located in Frankfurt. Federal Finance Minister Olaf Scholz said: „With the Sustainable Finance Strategy, we want to anchor sustainability as a guiding principle in the financial market and develop Germany into a leading location for sustainable finance.“ The Federal Minister of Justice and Consumer Protection Christine Lambrecht underlines: „We would very much welcome it if the ISSB were to be located in Frankfurt, as we consider close international cooperation in the development of a globally accepted minimum standard for sustainability reporting to be very sensible.“

Frankfurt’s application also has high-level support at the state level. Hesse’s Minister President Volker Bouffier: „ISSB and the State of Hesse – that’s a perfect match. Because the state government is also committed to sustainable finances. As a top financial centre in the EU27 and located in the heart of Hesse and Europe, Frankfurt with its unique financial ecosystem will be the ideal home for ISSB.“

Hesse’s Finance Minister Michael Boddenberg and Economics Minister Tarek Al-Wazir have also signed the application. Finance Minister Michael Boddenberg: „Hessen is also putting Sustainable Finance into practice in the capital markets. I cite as examples the state’s recently successfully issued Green Bond and the sustainable investment of our pension reserve. The ISSB therefore finds a comrade-in-arms for sustainable finance in the State of Hesse. For example, we were also the first state actor in Germany to sign the UN Principles for Responsible Investments.“

Economics Minister Al-Wazir underlines: „The Green and Sustainable Finance Cluster Germany at the financial centre Frankfurt, which was co-initiated by the state government, plays a leading role in sustainable finance, especially in the European and national context and when it comes to building bridges into practice. The State of Hesse will continue to persistently pursue the further development of the Frankfurt financial centre into a leading sustainable finance location and support it at all levels.“

The CEO of the Value Balancing Alliance e.V., Christian Heller, clarifies the importance of the ISSB for the financial industry and beyond: „We are convinced that our proven sustainability accounting methods will provide solid data to put the ISSB architecture and standards into practice. I fully support the Foundation’s efforts as an important building block to drive change through comparable sustainability information.“

Frankfurt’s Head of Economic Affairs Markus Frank and Gerhard Wiesheu, President of the Financial Centre Initiative Frankfurt Main Finance, underline the advantages of a settlement of the ISSB for the location: „Frankfurt is the most important financial centre in continental Europe and thus the ideal location for the ISSB. The financial industry with all its different players, but also investors and consumers, support this project. The ISSB will benefit massively from this openness to intensive exchange and close cooperation.“

In the coming weeks, the application will be backed up by a financing concept from private and public partners. A location decision by the IFRS Foundation is expected before the end of the year.